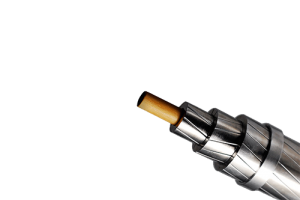 High-capacity aluminum conductor with composite core (ACCC), using annealed aluminum, reduces the electrical resistance of the conductor and increases its thermal capacity. An ACCC conductor of the same diameter as an ACSR conductor uses 0.28% more aluminum, while weighing less for the same diameter. In addition to the use of aluminum, the thermal tolerance of this conductor is more than 200 degrees Celsius, which causes the transmission capacity of the ACCC conductor to double compared to the ACSR conductor. The low coefficient of longitudinal expansion of this conductor causes that it does not increase in length in the case of increased temperature, and the wire sag is very small in this case, for this reason, this wire is one of the wires with high working temperature and low Sag.

The higher tensile strength of this conductor compared to the ACSR conductor will increase the span of structures and will bring significant savings in this field.

The removal of steel in the core of this wire and the use of a composite core eliminates the galvanic effect and increases the life of this conductor compared to other conductors. The trapezoid shape of the conductor also causes the conductor to be compressed and reduces the penetration of pollution.

In short, comparing the ACCC conductor with the ACSR conductor, it can be said that it has higher tensile strength and longevity, and twice the transmission capacity, and its Sag is also less.